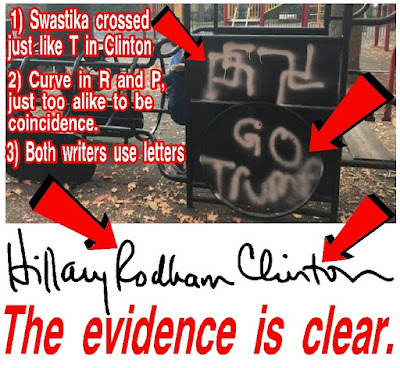 Dear Curt,
Someone has been writing "Trump" and "KKK" around underprivileged neighborhoods, trying to inform those people who won the election. I think because they may not know. The poor don't have access to Reddit and other reliable news sources like this website.

Liberals hate this public service. They are accusing great USA white people of "racism." However, I have done some graphology science on a sample of the graffiti and found some VERY interesting evidence. KKKurt, pls see the attached pic. Am I right? -Truth Seeker, NY

Dear Truth Seeker,
I have Alex Jones putting his best people on this. Just because The Republican Agenda has traditionally ignored, isolated and marginalized the inner cities, it doesn't mean they are racists. Look, people choose to be poor and if you want to be poor you have to pay a price.  It doesn't surprise me that lying, crooked Hillary is spreading hate. We know she's murdered hundreds, rigged elections, tortured mistresses and ridiculed Harambe.
Your indisputable evidence makes you an exposer of truth and a real patriot. Soldier on, hero.
Kkkkurt
at 10 December