About That Swamp Thing 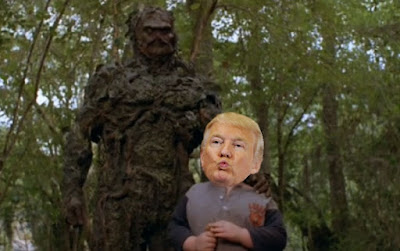 Newt told a 'reporter' on NPR that Donald will no longer be saying, "Drain the Swamp." I have never heard of NPR, but I assume Newt was talking to them to avoid hard questions from Teen Vogue.

Curt, does this mean Donald is no longer going to fulfill this promise? I know for a million $$, I can ask him myself after the inauguration, but I don't have it. I don't even have the $16 it would take to meet you. Can you ask him for me? -Randy, Wooburn

Dear Randy,
Actually my appearance fee is $15, but I will go ahead and answer your question for free.  NPR is the national communist network that Obama made to falsify the news. You may have heard some stories about fake news? Well NPR (NotPresentingReality) and PBS (ProbablyBullShit) were both found to be 100% false. First of all, I don't trust news from any woman who is less than a 10.  If they are working and aren't a 10, it stinks of nepotism.  Just a helpful guide for all of you - if they aren't eye candy, they are probably not a true journalist. As for draining the swamp, which I am not allowed to say out loud anymore, it was more of a figure of speech than an actual physical draining of a swamp. In fact, how would a creature named Newt even survive in a non-swamp environment?  Donald, like me and Jesus, love all creatures big, small, slimy and green.  If we drain the swamp, those creatures will die and we are not murderers like the Demoncrats who want to pretend the ice caps are melting so scientists get rich off the government. Perhaps if they spent more time on swamp maintenance and less about melting ice cubes, the world would be a better place. Hope this helps debunk the lying, fake media for you. -Curt
at 29 December